Decades after vaccines effectively wiped out serious diseases such as polio, measles and mumps in the United States, immunization—particularly for children—continues to be debated and even avoided. A notable minority of parents don’t keep up with their children’s vaccine schedule or forego immunization, citing concerns about vaccine safety, a link to autism (despite the lack of any definitive evidence), “too many” vaccines in the early childhood years, or their child’s distress at receiving an injection.

Whether through neglect or avoidance, the trend toward children not getting vaccines has begun to have serious ramifications. Measles has made a significant comeback in recent years because of this. While the number of unvaccinated children is small—about 5% among kindergartners in 2011, according to one study—the health impact can be profound. In 2011, the U.S. Centers for Disease Control and Prevention reported 222 measles cases, the highest number of cases since 1996.

If you’re like most hospital executives, you’re trying to get 100% of your patient population onboard with vaccinating their children, managing their children's vaccine schedule and staying up to date on their own immunizations.

Vaccines are a population health issue.

Vaccination is tied to many of the most important determinants of population health: life expectancy, infant mortality, death rates, disability and quality of life. That’s why, as hospitals focus on managing the health of their patient populations, immunization should be a top priority.

Why? Because it impacts the overall quality of care that hospitals are judged on.

Unvaccinated children require special care when visiting the doctor or hospital. Their lack of immunity to a variety of serious diseases threatens other hospital patients with compromised immune systems who are medically unable to be vaccinated. They are also more likely to suffer or even die from vaccine-preventable diseases.

The Affordable Care Act of 2010 set forth goals of increasing the quality of and access to healthcare while decreasing costs. While access to safe, effective vaccines is no longer an issue for most patients in the U.S., the individual choice to forego vaccination has both health and financial repercussions. Unvaccinated patients are more likely to end up in the more costly ED or need intensive care that they otherwise could have avoided. Their health is at risk, other patients’ health is at risk, and this all affects a hospital’s bottom line. In this era of value-based care, patients need to recognize the importance of immunization more than ever.

UbiCare supports hospitals in the effort to vaccinate all children on schedule. Our SmarteXP Pregnancy and Early Childhood messaging has a strong focus on immunization throughout a child’s development. 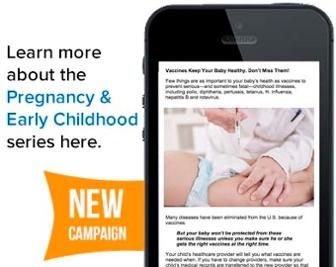 Getting immunized is a simple way that we can all “pay it forward” when it comes to health. The more people who are vaccinated, the less there are who will be exposed to a serious but preventable disease. This, in turn, increases the likelihood that the disease will be eradicated, resulting in a safer, healthier population. And that’s good for all of us.