What Is MACRA and How Does It Relate to Meaningful Use? In January 2016, Centers for Medicare and Medicaid Services (CMS) Acting Administrator Andy Slavitt announced that CMS would update Meaningful Use to focus more on patient care and outcomes.

At the same time, Slavitt brought renewed attention to the Medicare Access and CHIP Reauthorization Act of 2015—MACRA—triggering confusion among hospitals and health systems already scrambling to attest to Meaningful Use.

“Now that we effectively have technology into virtually every place care is provided, we are … in the process of ending Meaningful Use and moving to a new regime culminating with the MACRA implementation. The Meaningful Use program as it has existed, will now be effectively over and replaced with something better.”

So, what is MACRA?

MACRA is the newly passed Medicare Access and CHIP Reauthorization Act of 2015—a law that uses care quality, cost and clinical practice improvements to determine Medicare reimbursements to hospitals and physicians.

Is Meaningful Use dead?

Does MACRA signal an end to Meaningful Use itself? Is all of the work toward Meaningful Use dead in the water while we await a new CMS program to coincide with the goals of MACRA?

The answer lies both in the evolution of Meaningful Use and in the vision CMS now has as MACRA begins to take center stage. 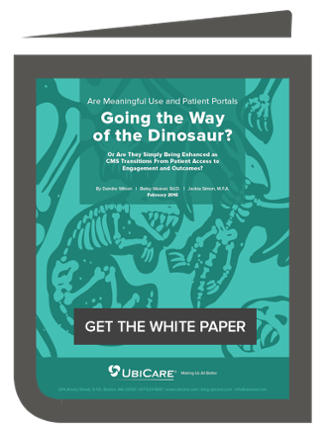 Keep in mind, however, that MU3’s regulations are required for all providers in 2018. Slavitt’s remarks don’t mean MU3 is dead in the water. In a blog he co-authored with Karen DeSalvo, Acting Assistant Secretary for Health in the U.S. Department of Health and Human Services, after his attention-grabbing speech, Slavitt makes it clear that MU requirements remain in effect as CMS transitions the program to one that works under MACRA, which will be phased in from now through 2021:

“We encourage you to look for the MACRA regulations this year; in the meantime, our existing regulations – including meaningful use Stage 3 – are still in effect.”

So the best way to view MACRA is as an evolution—not an end to—Meaningful Use. The key now is to make Meaningful Use meaningful. This will be achieved through patient engagement and improved outcomes and impact, not simply access. This may take time, but it will be worth it because, as we at UbiCare say, it’s about “making us all better.”

This blog is an excerpt from the white paper, Are Meaningful Use—and Patient Portals—Going the Way of the Dinosaur?  Download it now.